Trades off fire rate for increased damage and pierce

The Alternate Revolver (also known as the Slab Revolver) is the alternate form of the Revolver. It can be unlocked in [ 1-4: CLAIR DE LUNE ] after interacting with all four secret slabs found all throughout Limbo.

The Alternate Revolver fires two 1.25 damage hitscans, totalling to 2.5 damage per shot. These are not affected by locational damage. After firing, the hammer must be pulled down to fire again, and if V1 swaps back to the Alt Revolver without pulling down the hammer, or by not waiting 2 seconds after firing, a longer swap animation will play.

Unlike Standard, the fire rate is the same between variants.

Charge Shot fires six 1.25 damage hitscans, totalling to 7.5 damage, with a longer recharge than Standard. However, if 4 hitscans hit a single enemy, the next 2 hitscans will pass through, meaning only 5 damage dealt to a single enemy.

Split Interaction - Rather than splitshot like Standard, each split coin adds an additional hitscan to the Ricoshot (a single split coin becomes 1.75 x 3 = 5.25 damage). Additionally, Charge Shot will no longer pass through at 4 hitscans if any coin splits, resulting in 7 hitscans from a single split coin (1.75 x 7 = 12.25 damage total).

If one lands a ricoshot with the 2 pass-through hitscans of Charge Shot, they'll still get a full damage Ricoshot. Known as Slabcoining, this lets the player get an additional 5 damage on a Ricoshot.

There is no difference between the coins thrown by either Standard Marksman or Alternate Marksman. 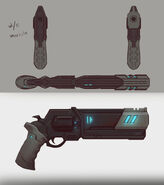 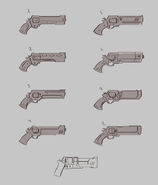