Edit
watch 01:36
We're Getting Mutants in the MCU - The Loop
Do you like this video?
Play Sound

Weight
?
Weight determines the behavior of the enemy when they are grappled by the Whiplash. Light enemies get pulled to you and Heavy enemies pull you towards them.

Drones are Lesser Machines that first appear in the mission [ 1-1: HEART OF THE SUNRISE ].

Drones are the smallest enemies in the game so far, being small purple machines with a single pink eye with lines on the sides that's presumably a glow radiating from between the metal plating. They will occasionally make chirping noises, almost similar to birds.

Drones are aerial enemies that will slowly move toward V1 until they are at medium range. If approached by V1, they will quickly back away until they are at medium range once more. Drones will frequently dash from side to side, which makes them hard targets to hit. However, they dash on a random basis, and do not dodge in reaction to V1's attacks.

Drones have one primary attack, as well as a kamikaze attack that triggers upon their death:

A Mass-produced security device built as both a surveillance camera and a security guard.

Though originally built only to use non-lethal ammunition, they have scavenged parts from the defunct machines on the surface for greater efficiency at collecting blood.

Curious by nature, but to keep production costs, their intelligence is very limited.

- Due to their light weight, physical projectiles such as nails will push them around, making them harder to deal consistent damage to.

- On death they will make a last ditch resort to harm their opponent with a self-destruct, but powerful single attacks and explosives will make them explode instantly.

- Punching a drone will redirect their suicide dive, making them a high-risk offensive opportunity.

- Their scanning mechanism makes a chirping sound, which can be listened for to make them easier to track down, as their flight and small size can lead them to hard to reach places.

Drones are not hard to kill, but can be difficult to hit. Being small targets that keep their distance and frequently dodge back and forth, projectile weapons such as the Shotgun and Nailgun are less effective. Since using Railcannons against a Drone is an inefficient use of its charge, the Revolver with its hitscan shots is the most reliable way to kill a Drone, requiring two regular shots before triggering its suicide drive. The Piercer Revolver's piercing shot will instantly detonate them, and shooting coins thrown by the Marksman Revolver will automatically target them, which bypasses their dodging. The Alternate Revolver's primary fire can kill them in one shot, and will cause them to fly back a short distance before triggering their suicide drive.

An easy way to dispatch Drones with any weapon is to drag them toward the player with the Whiplash and shoot them immediately after. Punching a Drone immediately after dragging them in with the Whiplash will net HOMERUN Style Bonus as long as the punch kills the Drone, which can be done from full health if the player punches with the Knuckleblaster. This can be directed at other enemies, similar to parrying a suicide bombing Drone.

With the Feedbacker, not only can you parry a Drone's kamikaze attack, but you can also parry a Drone's projectiles back at it. Finally, you can hit the Drone itself as it is charging its projectile attack to parry and send it flying in much the same way (best to be done be pulling a drone with whiplash). Doing so gives both HOMERUN and PARRY style bonuses. 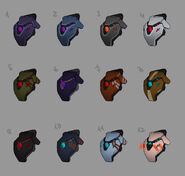