Weight
?
Weight determines the behavior of the enemy when they are grappled by the Whiplash. Light enemies get pulled to you and Heavy enemies pull you towards them.

A test of your reflexes and will to overcome challenge
Gabriel, also referred to as Gabriel, Judge of Hell, is the third major boss in ULTRAKILL and the final boss of Act I. He appears in the mission [ 3-2: IN THE FLESH ], where he first taunts V1 telling them to turn back before acknowledging V1's challenge and meeting it in his arena. Gabriel is currently one of four characters with speaking roles in ULTRAKILL, and is voiced by Gianni Matragrano. Upon his defeat, Gabriel is outraged at being bested by a machine, swearing that he'll return before teleporting away in a beam of light.

Gabriel is the first angel V1 encounters. He wears silver armor with golden pieces throughout and a golden cross is painted upon his helmet. He also has blue wings of light. Most unusual of all, however, are his swords. The swords are unusual because Gabriel fights exclusively with weapons conjured of light energy. We also know a little about Gabriel as an individual. Gabriel was first mentioned in level [ 1-4: CLAIR DE LUNE ] by the resident of the manor, who claimed to be a friend of Gabriel's, awaiting to enter heaven by his penance. He is known as the Will of God and is among the most powerful of all the angels. He killed Minos claiming it was justice, but we do not know why as the residents of Lust thought of him as a just ruler, perhaps it is because of this that he was killed. At the end screen of Infinite Hyperdeath, just after his defeat, we learn that this one defeat he faced was enough to question his loyalty, but he is unable to properly explain himself being declared a heretic and is stripped of God's power by a mysterious heavenly council and is given 24 hours to kill V1 and unmake his mistakes. He initially speaks very eloquently to V1, but in a holier-than-thou tone that shows he is arrogant and disgusted with V1.

In battle, Gabriel is a test of your reflexes as he teleports around to launch rapid fire attacks at you. Boasting the largest moveset out of any enemy or boss in ULTRAKILL (as of the current public build), he is a force to be reckoned with and will likely require multiple attempts to best. In Phase 1, Gabriel has two 3-hit combo attacks, one with a short sword of light that will end in the sword being thrown, which V1 can parry. The other combo being done with a greatsword that will end in a piercing dash towards V1. Gabriel also has a spear combo attack, where he teleports above V1 and preforms a helmbreaker before teleporting somewhere else above V1 and throwing the spear which both explodes and can be parried. In-between these attacks, Gabriel can throw twin axes which can be parried. After a certain set of theses attacks have concluded, Gabriel will taunt V1 and enter a passive state for a few seconds from which he can be freely wailed on. At half health, Gabriel's blue light will shatter and he will be launched into the air, from which he can be damaged to extend his air time, completely helpless all the while. After taking a certain amount of damage, he will properly enter Phase 2. In Phase 2, Gabriel changes from a silver and gold color scheme to red and gold while also increasing the speed of his attacks, giving old attacks new abilities, and even gaining new attacks altogether. He has the ability to teleport on the final attack of his 3-hit combos, and the spear combo gains one additional helmbreaker before the throw. Gabriel also gains a new attack, where he summons swords that spin around him as a defensive procedure to prevent V1 from getting close and healing. However, they disappear after a short period of time.

One of the most respected and feared archangels, Gabriel earned his reputation through power and efficiency.

Regardless of the task given, Gabriel would always perform it quickly and efficiently, earning him the title of Judge of Hell after dethroning Minos and ending the Lust renaissance.

Despite answering to the Council, he is far more popular and beloved among angels due to his radiant personality and active nature, especially compared to the Council that strictly follows and upholds the dogma of the Faith.

- Gabriel's movements are fast and his attacks are deadly, but with close observation, his next attack can be determined before he even starts it.

- Gabriel's pride stops him from attacking while taunting his opponent, opening a short window for healing.

Gabriel is tough, and death is going to be a normal occurrence even on repeat playthroughs, so the number one thing to learn is to not get upset with this fight. Learning the timings for parrying is vital since they can do so much damage and cut down the time spent fighting him. As far as weapons go, any one of them has their strengths. The Revolver and Alt Revolver can deal good poke damage during his attack cycles and the Piercer and Marksman Variants are solid in their own right. Shotgun Swapping is a good tactic for consistent DPS, as always. Gabriel actually takes extra damage from the Nailgun, so using it is a valid option which is more than what it can be said for similar bosses. The Attractor Variant is recommended because he moves so much via teleporting, it's better to shoot without aiming. The Railcannon is, of course, a great option for burst damage. Save it for the entire first phase, because there's a trick with it. When Gabriel gets launched in the air, stand under him to prevent him from reaching the ground, flick all 4 Marksman Coins into the air and shoot them with the Railcannon's Electric Variant while also through Gabriel to deal over half of is Phase 2 health.

Alternatively, if one wishes to cheese the Gabriel fight all you need to do is slide around the arena non-stop in one direction(clockwise or counterclockwise) , which will allow you to dodge all of Gabriel's attacks, occasionally firing off a Railcannon variant (Besides Malicious). 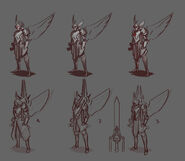 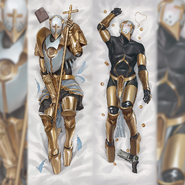 A mural of Gabriel as seen in Greed layer
Community content is available under CC-BY-SA unless otherwise noted.
Advertisement