Edit
watch 01:36
We're Getting Mutants in the MCU - The Loop
Do you like this video?
Play Sound

The Revolver is the first weapon type found in ULTRAKILL, taken off a pedestal at the beginning of [ 0-1: INTO THE FIRE ]. With their primary fire, they fire bullets with modest damage and decent fire rate; their consistent accuracy and hitscan shots makes them particularly effective at taking out enemies from range and firing at weakpoints.

Appearance-wise, the Revolver's cylinder is slightly off-center, sticking out further on the left side; it also seems to have only four chambers, which glow different colors based on the variant's color. The Alternate Revolver forms have a slightly different design, with an X-shaped cylinder and a hammer that must be pulled back after each shot; they are much more powerful, though have a lower rate of fire. Instead of glowing chambers, they have lights on the side of the barrel.

The Alternate Revolver can be obtained after activating each of the 4 slab switches, with one in each mission of Limbo. 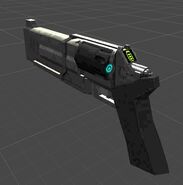 Old model of revolver used before the weapon redesign 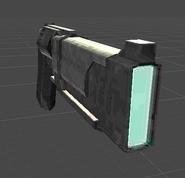