A human skull of varying color

On Halloween: Turns into a pumpkin

Skulls are objects present throughout ULTRAKILL that act like keys.

Skulls come in two colors, red and blue, and both colors are identical in function, although a blue Skull cannot activate a red pedestal, and vice-versa. Skulls are often found on pedestals, and are picked up by punching them. When placed upon the matching color of pedestal, it activates whatever the pedestal was connected to, usually a door. They are first formally introduced in [ 1-1 /// HEART OF THE SUNRISE ], although the blue Skull appears earlier as part of a secret in [ 0-2 /// THE MEATGRINDER ]. 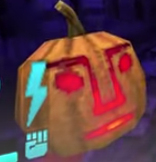